Majozi said Shabalala was with his wife, Thokozile Shabalala, during his last moments.

“Yes it’s true. Mr Shabalala passed on this morning. The group (Ladysmith Black Mambazo) is on tour in the US, but they have been informed and are devastated because the group is family.”

Majozi said Shabalala’s family would issue an official statement later in the day.

The South African government has also posted a message on Twitter saying, “We would like to extend our condolences on the passing of Joseph Shabalala who was the founder of the group Ladysmith Black Mambazo. Ulale ngoxolo Tata ugqatso lwakho ulufezile.”

Over the past few years Shabalala’s health deteriorated, resulting in him retiring from the group in 2014.

Earlier this year, Shabalala was admitted to hospital due to ill health, and those close to him asked fans to keep him in their prayers.

In 2017, Shabalala was admitted to hospital after his health took a nosedive after he underwent spine surgery and “struggled” to get back on his feet.

“He is old now. We were worried when he went in for the operation, and are still very concerned because he is sick, but he is getting stronger,” spokesperson Sandile Khumalo said at the time.

Although Shabalal officially handed over leadership of Ladysmith Black Mambazo to his son Sibongiseni about three years ago, the star occasionally made appearances with the group at events.

Khumalo said Shabalala’s ailing health meant he was no longer able to travel or attend events with the group.

Born in 1941, Shabalala was the eldest of eight children living on a farm in Tugela, near the town of Ladysmith in South Africa.

“When I was a young boy I dreamt of becoming an educated person; maybe a teacher, doctor or something like that,” he told South Africa’s The Citizen in 2014 .

However, he was forced to leave school at the age of 12 when his father died, working on the family farm and, later, in a local factory.

In his spare time, he would sing with friends in a local group called the Blacks.

“The young boys when they get together, they started to sing the songs, until the mamas and the neighbours said, ‘Hey, do it again,'” he told the BBC .

“It was just like that. They were calling, ‘Do it again, do it again’.”

He eventually became the leader and main composer for the choir, fusing indigenous Zulu songs and dances with South African isicathamiya, an a capella tradition that was frequently accompanied by a soft, shuffling style of dance.

They were re-christened Ladysmith Black Mambazo, a name that was significant on several levels: Ladysmith represented their hometown, Black referenced the black oxen that were the strongest on the farm, and Mambazo, from the Zulu word for axe, symbolized the group’s ability to cut down the competition.

A radio performance in 1970 led to a recording contract, and in 1973 they released Africa’s first gold-selling album, Amabutho.

They achieved global recognition after being recruited to sing on Paul Simon’s multi-million-selling Graceland album, most notably on Homeless, a song Shabalala co-wrote with Simon, based on the melody for a traditional Zulu wedding song. 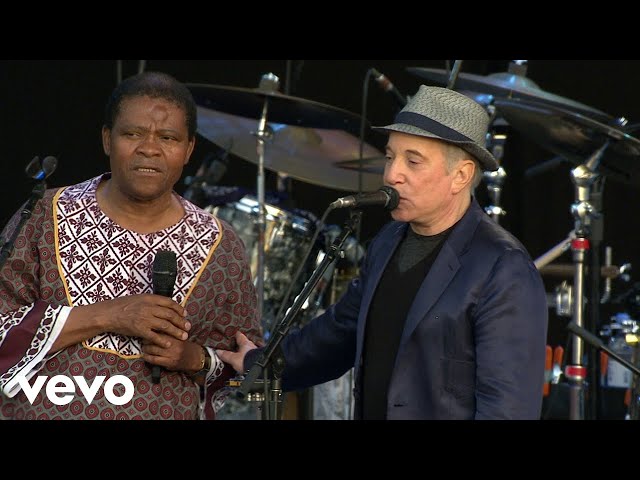 The band joined Simon on his subsequent world tour. In return, he produced their next three albums – with 1987’s Shaka Zulu winning a Grammy for best traditional folk recording.

Shabalala retired from active performance in 2014 shortly after performing at a memorial concert for Nelson Mandela.

He continued to teach traditional choral music, while four of his sons (and one grandson) continued his legacy within Ladysmith Black Mambazo.

The musician was with his wife Thokozile Shabalala, in his final moments, said Xolani Majozi.

As news of his death spread, tributes poured in from around the world.

“My friend, a giant humble man, Joseph Shabalala, passed away this morning,” wrote South African singer Sipho “Hotstix” Mabuse on Twitter . “My sincere condolences to his family and friends.”

“I am deeply saddened,” wrote Herman Mashaba, former mayor of Johannesburg . “You will be remembered as a giant of South African music and a pioneer of the industry.”

Tania Tatenda opens up on her Miss Global pageant showing

Please consider supporting us by disabling your ad blocker
Welcome to Zimbabwe Voice! By using this site, you agree to the use of cookies and some personal data by Zimbabwe Voice and our partners for analytics, personalization, and ad targeting.I agreePrivacy policy